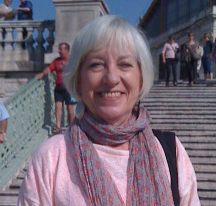 Gretchen Jennings offers services in museum education and interpretation, editing, and writing. She has worked in and with art, history, and science museums for over thirty years. Her work is guided by principles of inclusion and accessibility—cultural, racial, and physical.

From her childhood in the Philippines to her recent museum teaching in India, Gretchen has had a continuing interest in culture, race, languages—all the phenomena that make us both different and similar as people. With an MA in African and European History and in Education, she began her museum profession at the National Museum of African Art just as it was joining the Smithsonian Institution in the late 1980s. Her initial role as an educator at the Museum of African Art evolved into positions at the American Psychological Association and at the National Museum of American History as project director and interpretive planner for two major traveling exhibitions. The Psychology Exhibition (1992) and Invention at Play ( 2002) both won awards for exhibition excellence from the American Alliance of Museums.

In addition to management roles in education and exhibition development, Gretchen served as Editor in Chief for the Journal of Museum Education from 1996 to 1999 and for Exhibition, the journal of NAME (National Association for Museum Exhibition) from 2007 to 2014. Since 2009 she has been invited six times to teach interpretation and exhibition development in the MS in Museum Communication program of the National Council of Science Museums in Kolkata, India. She is an invited speaker annually for the Museum Studies programs at George Washington University and Johns Hopkins University.

In 2011 she began her blog, Museum Commons (www.museumcommons.com) where she first proposed the idea of the Empathetic Museum. Since 2013 The Empathetic Museum (www.empatheticmuseum.com) has emerged as a group of colleagues dedicated to the inner transformation of museums by creating a culture of empathy and resonance with their audiences. The Empathetic Museum provides a philosophy, tools, and workshops for confronting histories of colonialism, racism and privilege toward the practice of institutional empathy. Gretchen is also a founding member of the Museums and Race initiative and an active member of the MASSAction (Museums as Sites for Social Action) community working for social justice, diversity, and equity in the museum field.